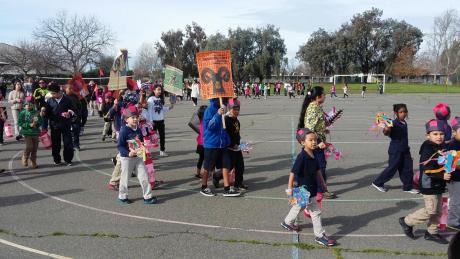 Bowling Green Charter School is a 50-year-old K-6 elementary school with an illustrious history that became California’s 18th charter school in 1993. In the mid-1960’s it was featured in Sunset Magazine for its innovative arboretum, which was a focal point of community involvement and integrated thematic instruction. As one of California’s earliest charter schools, it has continued that noble tradition and embraced other ground-breaking policies, such as class size reduction, that have since become common throughout the district and state.

At this time the school is organized into two distinct small learning communities (SLCs) : the Ken McCoy Academy for Excellence and the Chacón Language and Science Academy, working in tandem to serve the needs of our changing population. Both SLCs operate under one charter, the Bowling Green Educational Community.  Each small learning community has its own principal, governance structure, budget and educational program.

Prior to 1993 Bowling Green was a traditional elementary school in the Sacramento City Unified School District. The central campus is fifty years old. In 1993 the school became the 18th charter school in California. The charter was renewed in 1997 and again in 2002.  With extensive changes, it was again renewed in 2008.

In 1999 the school expanded with the construction of the BF annex of 17 classrooms; in 2001 the school library was expanded and renovated. In 2004 the West Wing was opened adjacent to the central campus with 11 classrooms.

During the course of any given year, the Child Development program provides early care and education to approximately 3,000 children ages 0-12.  Children served include typically developing infants, toddlers and preschoolers and those with disabilities.

Parents are afforded a variety of program options and approaches, including center-based and home-based services, full-day/part-day preschool, infant/toddler playgroups and before/after school-age care.

Copies of each school’s School Plan for Student Achievement (SPSA) are linked below. The 2021-22 SPSAs were adopted by the SCUSD Board of Education on June 24, 2021.

This is a free program based on family size and income. This option is a combination of Head Start and State Preschool services. Classes are in session 6 1/2 hours, Monday through Thursday and 3 hours on Friday.

As per Education Code, Bowling Green Elementary Charter School submitted the Local Control and Accountability Plan (LCAP) for the 2015-16 school year to both our chartering authority, SCUSD, and the Sacramento County Office of Education (SCOE) on July 1.

This is a free program based on family size and income. Classes are in session 3 hours per day, Monday through Friday.