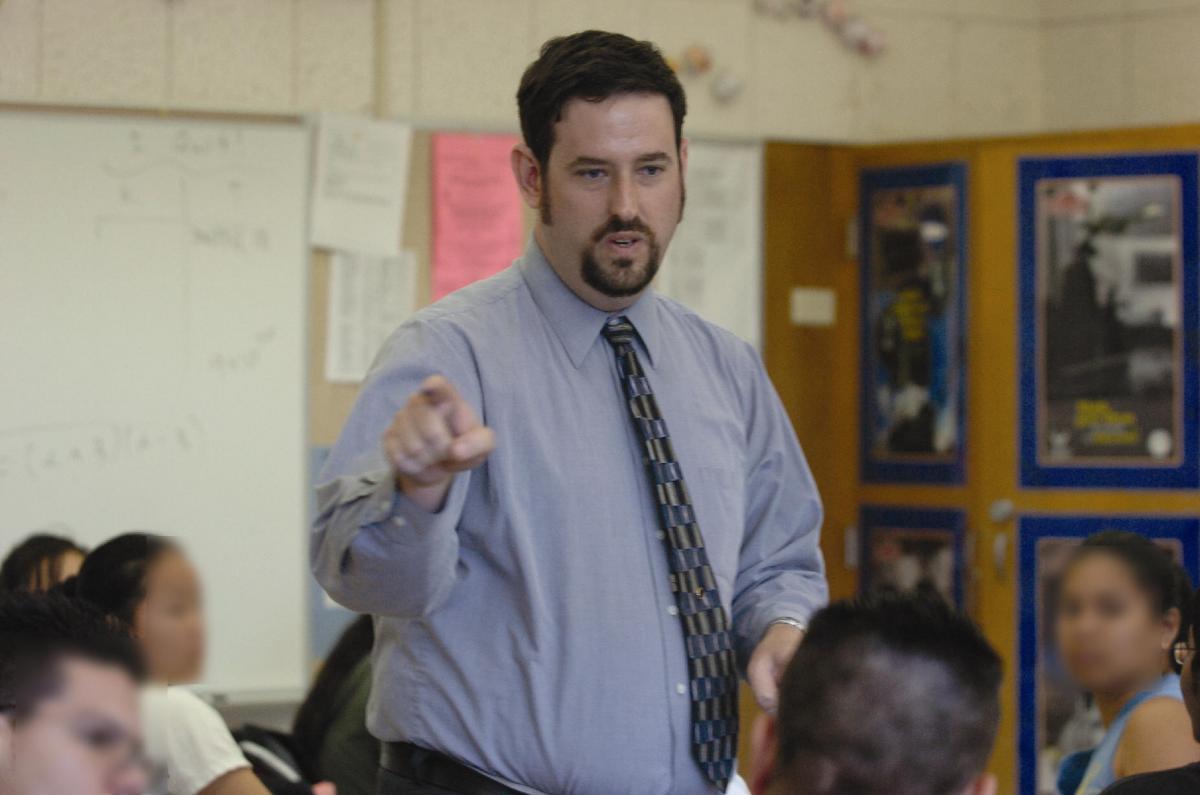 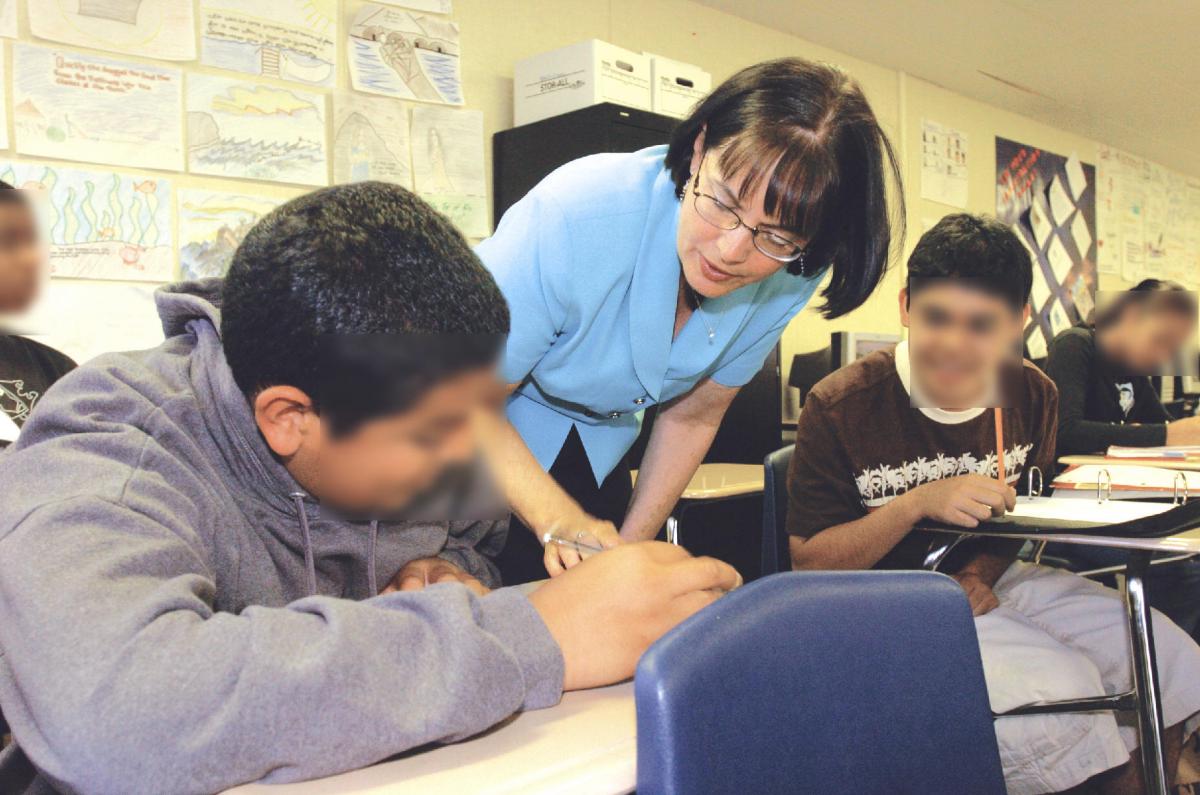 About Clayton Dagler:
In ninth grade, Clayton Dagler’s math teacher told him that he shouldn’t aspire to higher level math classes. Maybe the teacher was trying to do Dagler a favor. After all, the teenager did suffer from dyslexia and had a hard time in the class.

Instead, that demeaning comment had the opposite effect, giving Dagler the motivation to prove his teacher wrong. Instead of quitting math, Dagler continued to take higher level classes, eventually graduating from UC Davis with a mathematics degree.

That background has served him well as he works as a teacher at Luther Burbank High School, where he believes that every student can learn no matter what their situation or ability level.

That attitude is one reason that Dagler joins Marsha Stanley as a 2006 Sacramento City Unified School District Teacher of the Year.

“He, more deeply than any teacher I know, believes that students can be successful,” Burbank Principal Ted Appel said. His experience with dyslexia “has led him to understand that with good people around them every single student has can learn.”

Dagler said that his classroom struggles have allowed him to see the importance of small successes in learning.

To Dagler, even the students who say they don’t like math are teachable.
“Ninety-nine percent of those students don’t not like math, they don’t like failing,” he said.” Everyone wants to do good and everyone can. You have to show them small successes and build on that.”

Dagler has built on enough successes to watch several of his students attend college and major in math, a significant feat for many students at Burbank.

Both Dagler and Appel admit things weren’t so clear cut for Dagler when he was a rookie teacher.

“But he learned how to engage kids, structure his classroom and establish good relationships with the kids and their parents,” said Appel, who was working with new teachers when Dagler began his career. “He struggled mightily, but he was always open to getting better.”

Dagler now laughs about his trials as a rookie in the classroom. The second year was much better than his first and his third year was even better than that, he said. Now he mentors new teachers and tries to teach the same lessons he learned from Appel.

“It takes time (to become a good teacher),” Dagler said. “I’m still improving.”
“It’s important that teachers never stop finding new ways to teach and learning new things about what you are teaching. If you aren’t doing that, you shouldn’t be a teacher.”

While Dagler will enjoy a year of public accolades, he insists that there are plenty of others at his school deserving of such an honor.

“There are several teachers here who should be Teachers of the Year,” he said. “I’m just one of many teachers at Burbank and in the district who are working hard to help students succeed.

About Marsha Stanley:
Thank you Mrs. Werfel. Wherever you are.

Mrs. Werfel, an English teacher at Santa Clara High School in the late 1960s, taught her subject in such a manner, that she inspired Marsha Stanley to follow in her footsteps.

Stanley, an English Language arts and drama teacher at Art Benjamin Health Professions High School, didn’t exactly follow immediately in Mrs. Werfel’s footsteps. She took a little diversion—a 30-year career as a sales and service trainer for Pacific Bell—before she became a teacher. Now that she’s there, her students, and her principal, couldn’t be happier.

“She’s the most positive person I’ve ever met,” Principal Matt Perry said. “In terms of relationships, no one does it better.”

Her ability to build relationships is one reason Stanley joins Luther Burbank High School’s Clayton Dagler as a 2006 Sacramento City Unified School District Teacher of the Year.  Stanley is able to bring a positive energy to the students in her classroom and colleagues having a bad day, Perry said. “Her students love her,” he said. “She’s a very good role model for everyone, including adults.” But what sets Stanley apart is the lengths she goes through to build the all-important relationships.

Quite often she can be found riding the light rail into work instead of driving. Her schedule just happens to coincide with some of her students who rely on public transportation to get to and from school. While Stanley says that riding light rail is an opportunity to grade papers while someone else does the driving, she also admits to looking forward to the conversations she has with students outside of the classroom setting.

“I get a chance to know the kids more one-on-one,” she said. “It’s interesting to sit and talk with them about what they are reading in a more relaxed atmosphere.”  Perry said that Stanley’s optimism allows her to find a way when others might be discouraged from pursing a task.

For instance, Stanley wanted students to put on a production. But Health Professions has no stage and no money for a set. Classes take place in portables while the permanent campus is being built. No problem for Stanley. Her students put on two performances at neighboring Jedediah Smith Elementary School. And Stanley negotiated a partnership with Music Circus, where students get to see performances and interact with the actors visiting the theater. “Her paradigm is anything is possible with students,” Perry said.

Even with the honor of being named Teacher of the Year, Stanley still sees herself following in the footsteps of teachers like Mrs. Werfel. “I’m no different than 90 percent of the other teachers. I was just a little more lucky,” Stanley said. “We all want our students to succeed.”