SCUSD is committed to the success of all students irrespective of their immigration status, ethnicity, race, religion, sexual orientation, ability, sex and gender identity, socio-economic status or beliefs.

We hope this website is accessible and useful for all students, families, staff and community members in order to illustrate our ongoing commitment.

Please sign up for our Safe Haven newsletter to receive updates.

Note: Use the “select language” button in the upper right corner of the screen to translate page into 100+ languages. 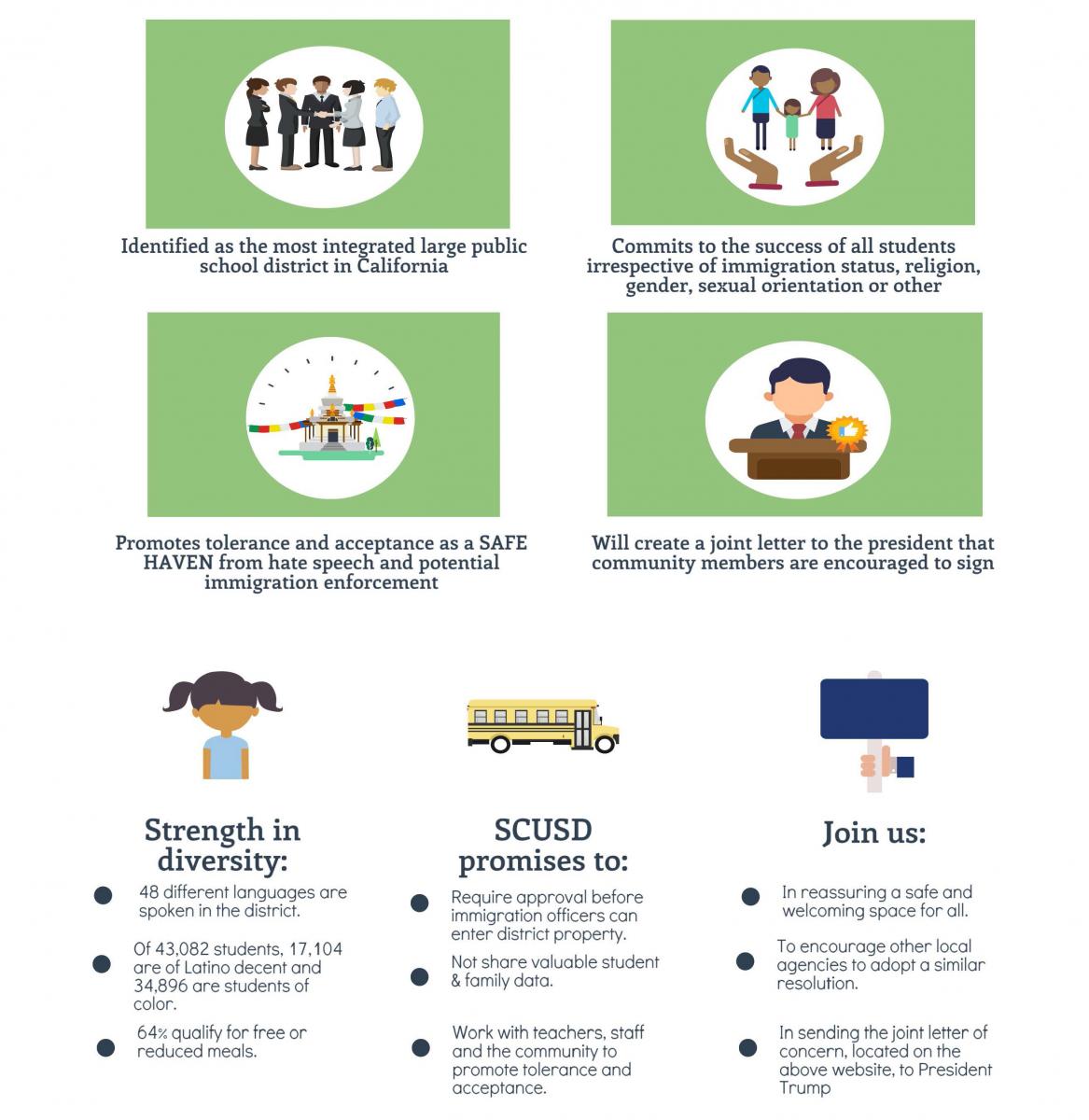 Resolution No. 2915: Recognition of A Safe Haven School District

On December 8, 2016 the SCUSD Board of Education voted unanimously to safeguard students and families.

Whereas, The Sacramento City Unified School Board of Education is committed to the success of all students irrespective of their immigration status, ethnicity, race, religion, sexual orientation, ability, sex and gender identity, socio-economic status or beliefs.

Whereas, The Declaration of Independence of the United States of America recognizes every individual’s right to life, liberty, and the pursuit of happiness;

Whereas, The United States of America was built by diverse peoples, both native and immigrant alike;

Whereas, Education has played a critical role in furthering tolerance and strengthening our society;

Whereas, On November 8, 2016, voters in California and across the nation participated in the democratic process by casting votes;

Whereas, The University of California, Los Angeles’ Civil Rights Project found Sacramento to be the most racially/ethnically integrated major city in the United States and Sacramento City Unified School District was praised as having the most integrated large public school district in the state.

Whereas, 17,104 of 43,082 students in Sacramento City Unified are of Latino/a descent, 34,896 are students of color, and more than 64 percent of students qualify for free and reduced lunch;

Whereas, The national presidential election has resulted in thousands of students and families in Sacramento expressing fear, sadness and concerns for student safety, heightened because of intolerant rhetoric made over the course of the 2016 presidential race;

Whereas, Youth and families across the district have already experienced increased levels of hate speech based on their ethnicity, religion, or sexual orientation since the election; now, therefore, be it,

Resolved, That the Sacramento City Unified School Board of Education directs the Superintendent to support the creation of a safe haven school district. This status shall include:

Resolved further,  That the Sacramento City Unified School Board work closely with the City, County and other state and local municipalities and community organizations to ensure our students and families are offered a protected space;

Resolved further, That along with the Los Angeles Unified School District, the Sacramento City Unified School District Board of Education will submit a joint letter to the President-Elect, with the Superintendent, as well as any District students, families, staff, and community partners who would like to be added as signatories, affirming that the American ideals that are celebrated in Sacramento culture contain a number of core ideals and values that include liberty, equality, democracy, individualism, equity, unity, and diversity and we will continue to celebrate them;

Resolved further, That the Board reaffirms its focus on promoting and elevating tolerance, inclusiveness and kindness of all students, families and staff at all district school sites, facilities and material property;

Resolved further, That the Board reaffirm the authority of the Superintendent to protect the data and identities of any student, family member, or school employee who may be adversely affected by any future policies or executive action that results in the collection of any personally identifiable information to the fullest extent provided by the law; and, be it finally

Resolved further, That the Board shall not allow ICE agents on school sites, facilities or material property without receiving prior written approval from the Superintendent;

Resolved further, That the Board reaffirms Sacramento City Unified School District’s unequivocal commitment to ensuring a safe educational environment for all students, serving as a safe haven school district for students and families threatened by immigration enforcement or discrimination, to the fullest extent provided by the law.