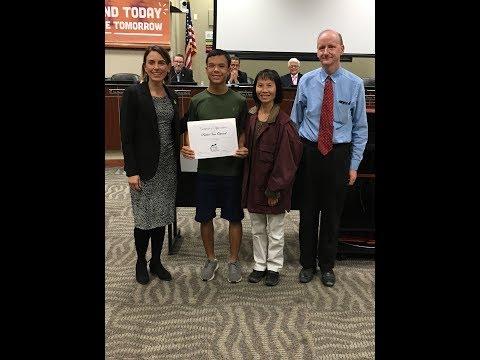 On Thursday, October 3, 2019 the Board of Education gave special recognition to McClatchy High School 9th grader Parker Van Ostrand. Parker is a nationally-renowned pianist who began studying piano at the age of four. He has already achieved many accomplishments, including performing at Carnegie Hall at the age of five after winning gold in the American Association For Development of the Gifted and Talented (AADGT) Competition. Since then he has returned to Carnegie Hall twice and has performed in numerous recitals throughout the United States, Singapore, and Japan.

“Parker is a young man of many, many talents,” said Board Member Lisa Murawski in recognizing Parker at the Board meeting.

In addition to his piano skills, Parker is a well-rounded student. He studies in McClatchy’s Humanities and International Studies Program (HISP), while competing as a cross-country athlete for CKM. He also loves painting and is learning Japanese. One is Parker’s goals is to one day run in the Boston Marathon.

We are very proud to recognize Parker Van Ostrand for all his many accomplishments and wish him all the best as he continues his academic career at McClatchy High School!