All Schools Closed Through the End of the School Year >> 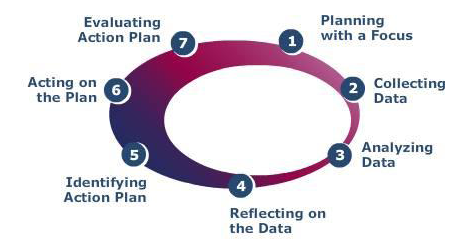 A Teachscape follow-up training session for principals and Central Office administrators was held on Thursday at the former Genesis High School site.

The half-day session focused on the examination of data collected from the classroom walkthroughs completed by site administrators and district personnel between January and June. The focus of the session was to revisit the classroom walkthrough process (below) with an emphasis on extracting data gathered through the Teachscape reporting feature. The session emphasized the reflective dialogue that should occur after the data is isolated and presented.

Sacramento City Unified School District hosted the fifth meeting of the SCUSD Common Core Work Team on Thursday. This team, comprised of 127 teachers in grades preK-12, has been engaged in utilizing the data-inquiry process to deepen their understanding of the California Common Core Standards (CCCS). The CCCS, which will be fully implemented state-wide in 2014, are a rigorous set of internationally benchmarked standards designed to ensure that all California students exit high school career- and college-ready. During the meetings, teachers collaborate in grade-level teams to develop performance-based reading and writing assignments that align to the higher-level of cognitive demand required by the CCCS. Teachers also develop lesson plans and analyze student work samples to inform instructional improvement. The common core work team is diligently working towards actualizing Pillar I of Strategic Plan 2010-14:

The district successfully executed its plan and refunded $79,585,000 outstanding general obligation bonds. The Election of 1999 Series B and C and the 2001 refunding general obligation bonds were sold on Thursday, June 9, with Morgan Stanley as the senior manager, KNN as the financial advisor and Orrick, Herrington and Sutcliffe as the bond and disclosure counsel for the transaction.

Originally, the district intended to refund all bonds in the three series. As it turned out, we did not refund the longest maturities in each series as there was not sufficient savings. This was a conservative decision that gives the district options to achieving savings in the future.

In preparation for and as a standard practice, the district’s long term ratings were reviewed by Moody’s Investor Service and Fitch Ratings. In April 2010, due to the implementation of a global rating model, Moody’s upgraded the district’s long-term rating to Aa2 from Aa3. In February 2011, prior to the Certificates of Participation (COP) restructuring, Moody’s reaffirmed the long term rating of Aa2 with a negative outlook reflecting concern over 2010 year-end General Fund balances and low cash reserves . This time around, Moody’s changed the rating back to Aa3 with a stable outlook primarily due to below-average General Fund balances and cash position as compared to other AA-rated school districts. Fitch Ratings confirmed the district’s AA rating with a negative outlook citing the declining Sacramento economy, limited financial reserves and the uncertain outlook for the state’s economy. Despite the change in rating, these are still strong at a time when investors are negative about the state of California and Sacramento County.
The refunding produced 9.3 percent savings or $8.2 million in present value savings and $10.9 million future value savings to the taxpayer. This is a considerable savings in light of the benchmark 3 percent present value savings target that was discussed with the Board.

Postponing the sale until the market was stronger resulted in additional savings for our taxpayers. There was institutional and retail investor interest and several of the maturities were over-subscribed, meaning there were more buyers than bonds. The transaction will close on June 29.

SCUSD’s Transportation Department, under the leadership of Chuck Ernst, started a pilot bio-diesel project. There are currently two buses running on 10 percent blend of bio-diesel fuel with three more buses to come on board in July. The pilot will last until December, allowing the buses to go through three cycles of tune-ups to ensure there are no engine issues with the bio-fuel. At that time, the program will be evaluated and as many buses as possible will be fueled with a blend of bio-diesel.

The pilot currently uses B-10 fuel – 10 percent bio and 90 percent diesel – but will move quickly toward a B-20 blend of diesel fuel. Some of our new buses and other diesel-fueled equipment will not run on anything over a B-5 blend as it invalidates their engine warranties, so staff is looking at other methods to ensure our buses run as cleanly as possible.

Additionally, the district will use Proposition 1B (formally known as The Highway Safety, Traffic Reduction, Air Quality, and Port Security Bond Act, which was passed by voters in 2006) funding to purchase and install particulate traps that will assist with reducing mono-nitrogen oxide emissions to 2010 emission levels. The transportation department also has 16 CNG (compressed natural gas) buses. They must be used for shorter trips as they require fill-ups more often at a station off-site. Additionally, approximately 16 older diesel buses will be replaced through the Low Emissions School Bus Program with diesel engine buses that meet or exceed 2010 emission requirements, running cleaner than Compressed Natural Gas buses. All in all, the transportation department is making progress in going green!

In preparation for the July 5 opening of SCUSD’s new Enrollment Center, day-long trainings were held this week for center staffers to familiarize them with all aspects of school district operations. Various SCUSD departments gave detailed presentations to provide Enrollment Center employees with necessary information to answer parent questions as they arise this summer.

American Indian Leadership Conference and 2011 Graduation Ceremony
More than 90 SCUSD students, parents and community members attended the annual American Indian Youth and Parent Leadership Conference held on Saturday, May 21, at the Roseville Maidu Museum. Students and parents participated side-by-side in Native Californian storytelling traditions, exploring artifacts and learning through hand-on activities such as acorn grinding. They also participated in a walking tour of the petroglyphs trail. The conference concluded with a graduation ceremony for students in the American Indian Education Program.

Youth Development Support Services finished its last two Youth Educational Conferences last week. The 13th Annual Iu-Mien Education Conference was held June 2 at UC Davis. Titled “My Life, My Strife, My MIENtality,” the conference featured workshops aimed at empowering students with knowledge of their culture and history. The 5th Annual Lao Educational Conference was held on Friday, June 3, also at UC Davis. More than 100 students attended this event, titled “Staying the Course.” Students were encouraged to continue to work hard and believe in themselves as they move forward towards achieving their goals.